Wherever I hang my bike... that's my home! 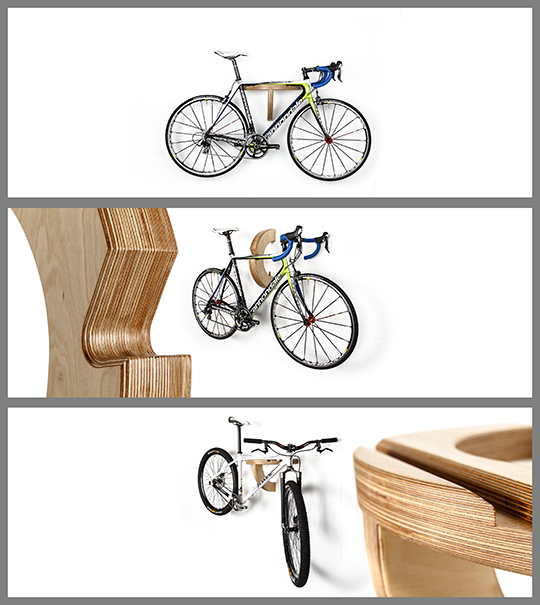 You can’t fail to have seen the growing interest in cycling in recent years… indeed the Tour De Yorkshire has only just finished for another year… and that grew out of the amazing support the Tour De France gathered when it came to Yorkshire in 2014. However where you park your bike has become a little more challenging… if you want to find it there when you return from your coffee!

A recent phone call from Greg Villalobos reminded me that with imagination and some talent solutions to problems present themselves. A video producer, designer and BAFTA winner Greg was interested in a friend’s problem of where to store her bike in a house without a garage… typical of many city dwellers. That his friend was a talented sportswoman and therefore rode a highly valuable bike made the problem a little more challenging then simply leaving the bike outside against the fence!

I’d first met Greg a couple of years ago.. it was easy to identify him as the rider of the Triumph motorbike which everybody was admiring from the windows… he was the only one in the room with a crash helmet!

Later he asked if I could help him create images for a website Gregory North, as his bike rack designs were gathering interest and sales enquiries from those who had seen his friend’s example.

A clean, simple design, hand crafted in plywood we discussed the type of client this would appeal to…. and decided the white block walls of the studio would work well… so out came the drill and in a couple of minutes we had beautifully engineered bikes hanging from the studio walls… simple!

And the recent call from Greg… well that was about a technical issue he was having with a new project… unfortunately he’s not just a nice guy but also one of those infuriatingly creative individuals who sees something that interests and inspires him and he jumps straight in… as was shown by the  recent award from The Motorcycle Film Festival for his short documentary film on The Coast to Coast Trail.